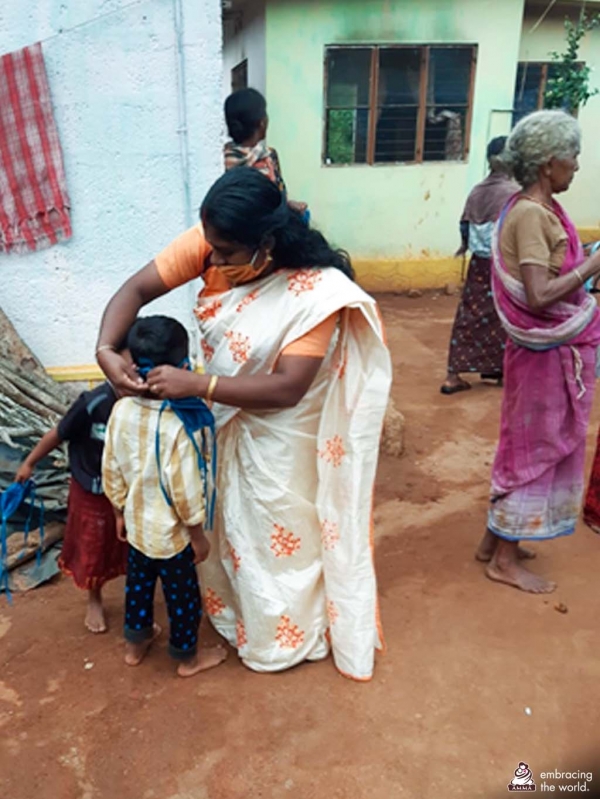 COVID-19 brought forward a challenge to India’s education system as never seen before. When the nationwide lockdown came into effect on March 22nd, all schools and other educational sectors were closed. AmritaCREATE is our Center for Research in Analytics, Technologies & Education. Its key area of work is in low-income areas in rural India where literacy is lower and school dropout rates are higher than in urban centers.

From the beginning of the pandemic, CREATE identified a number of factors that would bring challenges to the fields of basic education, especially in rural India. These included a downward slide in educational access; child mental health during the lockdown; the stress of failing year-end tests, especially for grades 10 and 12 in the Indian education system; and a rise in the number of school dropouts.

In terms of needs in the villages, CREATE decided to take a two-pronged approach:

1. Immediate intervention during the fear created by COVID-19.

2. Documentation of research in order to have concrete information upon which to build future solutions during such emergencies for students and their families.

India’s initial lockdown lasted almost three months until the government announced that on June 8, 2020, certain services could restart in a phased manner. CREATE immediately began to assess the ground situation and explored options for supporting education, such as online education with support from its central offices in Amritapuri. The first step was to provide online teacher training for these revised classes.

As the lockdown began to ease, CREATE sought permission from local bodies of administration to open education support centers in those areas, even though schools were not open. Regions with no reported Covid cases within a twenty-mile radius were willing to give permission, however regions where cases were still active remained under lockdown.

In India, board examinations for 10th and 12th standards are crucial to the way in which students plan their futures. Thus, the centers were opened as quickly as possible for higher classes that needed this support. Even during the usual flow of life, these exams can be stressful for students, and COVID-19 only increased the anxiety. Many board exams had been left incomplete due to school closures.

Eventually, the lockdown and its effects dissipated even more, and middle school classes were added to CREATE’s educational support activities. In some places, online classes could not happen due to lack of resources or interest in the villages, nor could the team secure permission for regular classes.

Instead, CREATE employed a new method—teachers went door-to-door in the villages to connect with students. All Covid protocol was followed and social distancing was maintained. Teachers and children wore masks and washed hands as needed. As well, CREATE encouraged and monitored after-school attendance of online and TV classes provided by the government.

Activities began in villages in Punjab in July 2020 with just two online classes, but the numbers gradually increased over time. By November 2020, there were 18 educational support centers reopened across several states, eight of which had regular classes. There were also six door-to-door classes and four online classes.

On October 15th, the national government allowed state governments to decide whether to reopen their schools or not. Some states, such as Bihar and Tamil Nadu, reopened their high schools and higher education institutions. Students were counselled on the pandemic and seating arrangements for students were made as per the social distancing norm. Meanwhile some states, like Kerala that still struggled in the grip of the virus, decided that all educational centers remain closed.

At the beginning of March this year, several states decided to reopen all schools and colleges. Across most of India, the school year starts in April and each place will have to decide via its different realities how to proceed. For example, in Maharashtra a sudden spike in cases in March 2021 means a new lockdown in the Nagpur District. The biggest challenge for all regions is figuring out how to recommence education for children who have been out of the system for about a year, if not more.

During CREATE’s history, such a global crisis has never taken place on as massive a scale as witnessed in 2020. So while the team did all possible to address the challenges through quickly adapted interventions, they also tried to gather as much data as they could to prepare for such emergencies in the future. To the best of their abilities, they recorded the ground reality through surveys and one-on-one interviews. The surveys were completed over the phone, through door-to-door interviews, or in small focus group discussions of five or less people.

Some of the possible outcomes based on the research are:

1. Developing a model for maintaining education levels and mental health of children in rural and isolated regions during national crises and emergencies.

2. Gathering data to publish information about the on-the-ground experiences during COVID-19 to build a network of knowledge to support education during such future events.

3. Building upon both of the above points to influence policy for future crisis preparation.

The main focus for CREATE is the support and development of accessible education to address the needs of children, which includes tutoring and social support outside of school hours, as well as providing literacy training for adults.

Its research meets the challenge to find ways to better educational opportunities through the use of technologies that expand people's horizons one step at a time. The solution to these issues requires a multidisciplinary approach that draws upon expertise in the physical, biological, statistical and social sciences. Based on this knowledge, CREATE applies innovative digital solutions to provide accessible and affordable educational technologies for all.

According to the Government of India, the overall literacy rate for the country for people over 15 years old is 69%, with 79% for men and 59% for women. In addition, there is a huge gap between rural and urban areas. For women in rural India, it is 51% whereas in cities it is 77%. For men, rural India has a literacy rate of 74% versus 88% in urban areas. On the positive side, the literacy rate among women and girls in rural India is increasing the most rapidly at a rate of 24%.

Photo: In Kerala, a village worker puts a mask on a tribal child.