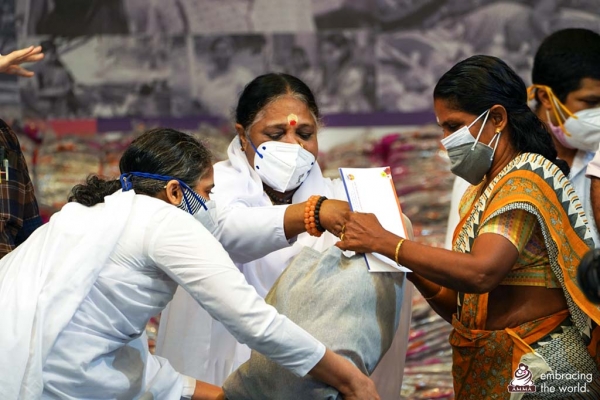 AmritaSREE (Self-Reliance Education & Empowerment) includes 15,000 self-help groups in 21 states across India and has more than 250,000 members. Most of the SHG women are from villages and other isolated rural areas in India.

This year, its 16th anniversary, Amma began a second installment of a COVID-19 aid package for AmritaSREE members. The project is a contribution worth ₹350 million ($4.6 million US) and consists of financial assistance, grocery kits and clothes. Aid is also going to people affected by recent floods in Kerala.

Amma explained this is support for the fact that these women sincerely try their best to stand on their own two feet:

“They do not shift their responsibilities to anyone else, or depend on others, or blame others. If we focus on the faults and shortcomings of others, there will be time for nothing else. Instead, take up the reins of your life firmly in your own hands and move forward,” she said.

“Many of the AmritaSREE members in different units have been able to put in money and start their own businesses. Many have been able to build homes for the homeless with profit from their businesses. Many were able to conduct weddings with the money. Many were able to give money to others for treating illnesses. Even though those people did not have much, they had the attitude to contribute what they had earned through their hard work.”

The launch of this year’s support took place in Amritapuri on December 18th. Sri V Muraleedharan, Union Minister of State for External Affairs & Parliamentary Affairs of India, took part online. He emphasized how it is a known fact that women form the base of all kinds of development taking place around the world.

"According to the UN World Survey in 2014, fields such as education, health and employment have exhibited drastic improvement following the participation of women in decision-making. The advancement of society is entirely based on the empowerment of women,” he said.

“Amma's intention behind the introduction of SHGs is not entirely for helping the needy ones, but also to make them a part of society's development. She is very aware of the importance of women's involvement in developmental activities."

Sri CR Mahesh, Honorable Member of the Kerala Legislative Assembly for Karunagapplly, attended the event in Amritapuri and expressed his gratitude for the positive impact AmritaSREE has had upon the women and their families in his region.

“As a social worker who represents this area, when people unburden their sorrows, unknowingly my tears flow. People all around us are in debt, sick and dying because they cannot afford treatments. The sadness that started with floods continues unabated due to COVID and we Malayalees are pushing ahead with sadness,” he said.

“It is during these times that Amma is showering us with her grace. Irrespective of religion, caste, creed, or affiliation, accepting all those who come to Amma, they receive her love and care. Amma consoles them and lightens their sadness. The noble activities that Amma is doing, that this Math is doing; as the people’s representative, I am happy and extend my support.”

Sri Arif Mohammad Khan is the Honorable Governor of Kerala and virtually attended to declare the distribution of aid to AmritaSREE SHG members. He shared how he was deeply moved by the story of a poor village woman who came to Amma about a disease that affected the poultry in their village, and that Amma spent a long time speaking with the woman about it.

“For an affluent onlooker, the death of two or three hens may sound very small. But for the poor woman, poultry-rearing was a means of livelihood. When she saw her hens dying, the village woman realized that the rhythm of her life was disrupted,” Khan said.

“Amma realized this and considered it her duty to give her patient care and console her. The message that Amma gives is that there is nothing holier than feeling the pain of those who suffer. That is the essence of all devotion.”

It was in 2005 that Amma began AmritaSREE as an initiative that would empower rural women to independently earn a living. This came in the wake of the 2004 Indian Ocean Tsunami when families that depended upon fishing were completely devastated.

Amma’s firm resolve was that at least one member in each family engage in a profession that was not reliant upon increasingly unpredictable weather patterns, especially fishing and farming.

Beenamma started as a member of one of the AmritaSREE SHGs in Kerala, and through joining with other women to support each other in relieving their financial burdens, her role evolved.

“I am not highly educated. In fact, I have only studied up to 8th standard,” she explains.

“In spite of that, with the continuous and systematic training that I have received from AmritaSREE and the emotional support and strength that they give me, I have become the coordinator of a cluster of 60 SHGs with a membership of 500 families.”

Every year on the anniversary of AmritaSREE’s launch, a seed grant of ₹30,000 is provided to each SHG. Over 500,000 saris are also distributed to AmritaSREE members, along with new clothes for their families. Even when the pandemic hit in 2020, Amma ensured necessary help, including food kits, reached all AmritaSREE members.

In the first installment of COVID-19 relief for AmritaSREE members, Embracing the World provided ₹500,000,000. This now brings the total to ₹850,000,000 in direct assistance.

Photo 1: Amma says the COVID-19 aid package is to support the AmritaSREE members during this difficult time, as these women sincerely try their best to stand on their own two feet.
Photo 2: The support packages consist of financial assistance, grocery kits and clothes.
Photo 3: Sri CR Mahesh is the Honorable Member of the Kerala Legislative Assembly for Karunagapplly (far right). He expressed how Amma is reaching out to all suffering during these sad times, irrespective of religion, caste, creed or affiliation.
Photo 4: The AmritaSREE SHGs come to be collectives of self-empowered and financially independent women.
Photo 5 : AmritaSREE focuses on helping the women gain the right awareness and means to feel empowered so they can overcome any marginalized social status.
Photo 6: Today, the AmritaSREE SHG program is active across India and has brought about spectacular transformations in the lives of the women and, through them, their families.