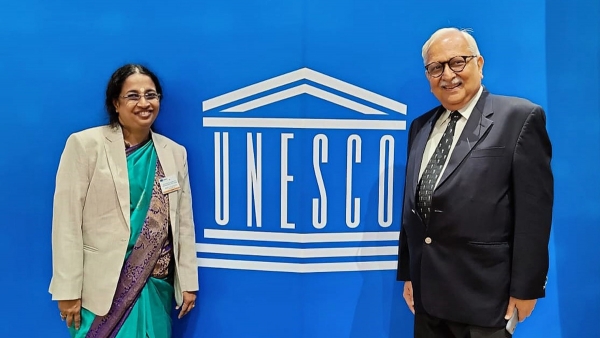 Today, it involves more than 850 institutions in 117 countries to promote international cooperation between universities so that together they can share knowledge and uplift our world. With this impressive global reach, UNESCO launched the University Twinning and Networking Programme (UNITWIN) in 1992 to establish Chairs in key areas such as education, the natural and social sciences, culture, and communications.

With its two UNESCO Chairs, Amrita Vishwa Vidyapeetham plays an active role in these efforts to partner with institutions to pool resources, both human and material, and address the world’s pressing challenges, as well as contribute to the development of society as a whole. The networks serve as think tanks and bridgebuilders between academia, civil society, local communities, research, and policymaking.

A two-day conference was held at the UNESCO headquarters in Paris, France November 3rd to 4th to celebrate 30 years of these accomplishments by UNITWIN, alongside inspiring greater interdisciplinary cooperation and catalysing new research collaborations in the years to come. The theme was on how to transform knowledge for a fair and sustainable future.

Amrita’s team met many other UNESCO chairs and professors from around the world including Australia, Africa, Canada, South America, Europe, Asia, and the USA. The conference was a wonderful opportunity for networking to strengthen collaboration among members and with UNESCO’s sector programmes.

The curriculum enables students, faculty and other members of the academic community to spend time in rural communities to experience first-hand the challenges villagers face on a daily basis. In this way, the university participants acquire the knowledge, skills, attitudes, and values necessary to implement sustainable solutions among vulnerable and isolated communities.

While in Paris, Dr Ramesh shared initiatives in two thematic sessions: 1) Multiple Knowledge Systems for Sustainable and Resilient Societies and 2) Interdisciplinarity at the Intersection of Sustainability, Inclusion, Resilience and Well Being. Her presentations covered work that has been happening at the university, including that of the Amrita School for Sustainable Development and our multidisciplinary experiential learning program, Live-in-Labs®.

She also contributed to informal sessions at the meeting of UNESCO Chairs and Networks in Asia and the Pacific Region, as well as a session on Transforming Curriculum and Pedagogy for Sustainable Futures.

In 2016, the university was awarded India’s first UNESCO Chair on Gender Equality & Women’s Empowerment. Held by Dr Bhavani Rao, its research, training, and educational initiatives focus on strategies towards the empowerment of women and strengthening gender equality with a community’s active and inclusive participation.

The approach is to understand the vulnerabilities of women and the interplay between these vulnerabilities in a comprehensive way to design effective and optimal interventional strategies. Since the Chair was established, Dr Rao has also become Dean of Amrita School of Social & Behavioural Sciences.

Dr Rao participated through virtual meetings from India, and Ms Claire Moleon, Coordinator of International Collaborations with Amrita’s Centre for Women’s Empowerment and Gender Equality (CWEGE), was in Paris. Ms Moleon shared Amrita’s work at a panel called Meeting of the Gender Equality Network. She met with Dr. Danielle Cliche, Interim Director of the Gender Equality Division, Cabinet of the Director General, UNESCO and other UNESCO Chairs and Professors from around the world.

Other representatives of Amrita included Ms Sujatha Ramanathan and Ms Anuradha Janakiraman. They participated in several sessions, including Towards a Research Agenda to Transform Education; Futures of Higher Education; and Open Science, Artificial Intelligence, and Implications for Future Researchers. They also took part in informal sessions on education and governance, alongside a meeting with water-related Chairs and Networks.

Clearly, these many gatherings allowed for multiple opportunities for Chairs, Networks, UNESCO specialists, and other participants to exchange and initiate new collaborations. The UNITWIN research networks represent a unique resource for intellectual and scientific cooperation at national, regional, and global levels.

As the diverse connections fostered at this conference evolve, Amrita hopes to expand its collaborations with partners around the world. Such actions by students, teachers, academicians, and researchers contribute to realising the university’s vision to utilise knowledge for societal benefit and contribute to a prosperous and sustainable future for all.

Photo 2: Amrita’s team attended several events to collaborate with other UNESCO Chairs and design solutions based on the UN’s Sustainable Development Goals.