Italian documentary about Amma debuts in US and Germany 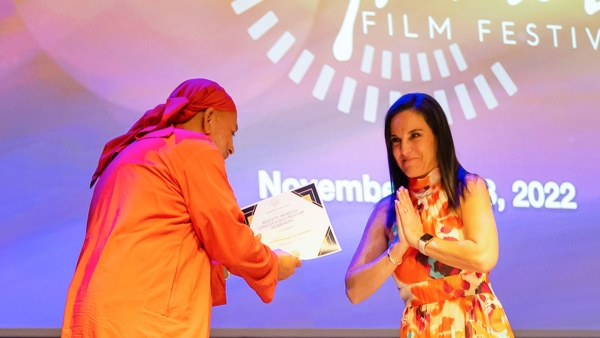 “Amma's Way: A Journey to Embrace the World Again” made its North American debut on opening night at the Illuminate Film Festival in Sedona, Arizona. More than 500 people attended the screening at the Sedona Performing Arts Center.

The documentary also won the ManguTV Award for Conscious Documentary Filmmaking. ManguTV’s $2500 cash prize was awarded to Amma’s Way since it exhibited the strongest story arc, most compelling subjects, and the highest impact potential. ManguTV invests in the distribution and completion of paradigm-challenging and consciousness-expanding visual content.

The 85-minute film portrays Amma and her humanitarian, societal, spiritual and educational work through the words of her disciples and devotees. From life in her Ashram in Kerala to a series of interviews, Amma’s greatness is revealed in a new light.

Anna Agnelli, the film’s director, aimed to present the astonishing humanitarian initiatives that Amma has created in parallel with her blessing in the form of a hug to millions of people worldwide. She was inspired by how Amma has served and continues to serve the world in a multitude of ways including projects to provide people in need with healthcare, education, shelter and housing, and relief support after natural disasters.

Following the screening, a Q&A session took place with Swami Dayamritananda Puri, Executive Director, MA Centers, North America. Several people asked questions about Amma, as it was their first time hearing about her. And then came the query everyone had in their mind: “When will Amma come back to North America?”

About the event, Swamiji said: “It was well attended by people from all over the US and North America. Some people even traveled from other states to Sedona, Arizona to see the movie, as this was the North American premiere. They were immensely grateful to the organisers.”

The film festival was organised by the Illuminate Film Festival Team, with Danette Wolpert being the Executive Director. She expressed she felt so fortunate to have Amma’s Way premiere at the gathering and expressed her gratitude to Ms Agnelli for sending the movie to the Illuminate Festival.

Amma’s Way has also premiered in Munich, Germany. The event was organised by Amma in München and attended by Swami Shubamritananda Puri, Executive Director, MA Centres, Europe. Ms Agnelli was able to participate via webcast, and an engaging audience discussion about Amma’s inspiration for people around the world followed the viewing.

As the global pandemic ends, Amma's Way comes as a breeze of fresh air for both those who already know, love, and miss Amma, and those who will discover her through this remarkable film.

Photo 2: Swamiji shared that some people even travelled from other states to attend the premiere in Sedona, Arizona.

Photo 3: The film is an inspiration for both those who already know, love, and miss Amma, and those who will discover her.

Photo 4: The film is an inspiration for both those who already know, love, and miss Amma, and those who will discover her.