The hands that serve: Relief work for refugees from Ukraine 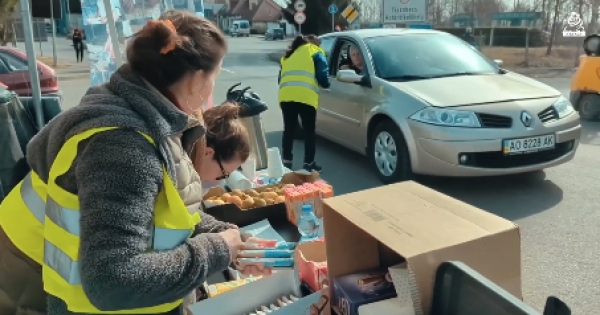 When the war started between Russia and Ukraine, Amma’s volunteers from across Europe head to border points in Poland and Hungary to aid refugees. Bearing harsh winter weather, they stayed put to care for women, children, and Indian students who arrived after traveling long distances to escape the fighting.

AI, data, and robotics must be for the common good

Though not a surprise, it can still be astounding to watch the impact that the continuing evolution of AI, data, and robotics has upon our society. When we wake up, many of us reach for our mobiles or laptops to plan the day.

But how to ensure these technologies do not have negative impacts upon humankind? Especially when it comes to those who live at the bottom of the economic pyramid?

“When we say robotics and AI are for good, I think the good part should come first and then the AI, the robotics, or whatever technology you want to use comes next. It is a reframing,” said Amrita Vishwa Vidyapeetham’s Dr Bhavani Rao at the FARI for the Common Good Institute’s International Conference in Brussels, Belgium.

“You have to think about everybody in the world and that is a mind shift. There are certain common goods that are beyond national or regional boundaries, and that’s a shift that the technology world has to make. We have a responsibility towards that. You think you solve one problem, and you can break things in another place.”

FARI is an independent, not-for-profit Artificial Intelligence initiative led by two universities in Brussels, the Vrije Universiteit Brussel (VUB) and the Université libre de Bruxelles (ULB), and aims to help address the everyday and long-term challenges of AI and robotics. With the premise that the future of AI, data, and robotics should serve the common good, the two-day international conference aimed at co-shaping an AI strategy that is sustainable, inclusive, and comprehensive.

Dr Rao travelled to Brussels to attend the gathering, for which she expressed gratitude in being able to meet her fellow academics in person as the pandemic ends. She has an interconnected set of responsibilities at Amrita as the Dean of the School of Social Work & Behavioral Sciences; the Director of AMMACHI Labs which designs and implements technologies to solve social problems; and Amrita’s UNESCO Chair in Women's Empowerment and Gender Equality.

“At our university, we have a very unique mandate in research—it has to have social impact. It’s very rare that we do research which is only in the lab. Almost everything that we do has something tangible that is happening in the field, solving a real-world problem,” explained Dr Rao.

AMMACHI Labs’ research tackles a particular issue, not a particular kind of a technology, and then creates innovative methods to find solutions. One of its largest projects has been skill development in rural India. With a population of 1.39 billion according to the World Bank, the country is the world’s second most populated nation. Most of those people, 66 percent, are below the age of 35 and at the same time, 64 percent of Indians live in rural areas.

As for the most critical issue, the Pew Research Center using World Bank data has estimated that the number of poor in India (with an income of $2 per day or less in purchasing power parity) has more than doubled to 134 million from 60 million due to COVID-19 and the pandemic’s resultant recession.

“Let’s look at this really challenging problem of skill development in India. We have more than 500 million Indians who need some kind of training,” said Dr Rao. “Do we have the infrastructure to do it? We started working on this problem in 2009, and it still looms large despite the efforts we have made.

“We are a very diverse population. We are scattered in such a wide area. We have different languages. We don’t have the kind of infrastructure that can deliver good education. Nobody wants to talk about it. You push it under the carpet because it is not elite.”

One of the key issues is that once someone is trained in a particular vocation, they leave for the city to earn and no one is left back in the village to pass on the knowledge. There is also a social stigma attached to the vocational trades, more so in India where you had a caste system. A plumber is considered a low-caste job, so nobody wants to take it on even if the money earned is higher.

When AMMACHI Labs began its work in skills training, it established a focus on empowering women, as village women are, by tradition, the caregivers of the rest of the family and this leads to society at large.

Yet, at the same time, women are the most disadvantaged. The level engaged in the paid workforce in India is less than 20 percent. To address this, AMMACHI Labs explored a series of technology to train women in skill development using e-content on vocational trades. As the project evolved, they developed robotic technology to directly engage the students in the physical skills they needed to learn.

“We built the first haptic simulator in the country. It is a force feedback device with three degrees of freedom and one degree of force feedback. It simulates about 18 different tools in the computer. We fed the machine with data from experts in the construction business to record all the movements and gestures,” said Dr Rao.

The haptic simulator was a success and led to the development of more complicated simulators, but then came the question of addressing the entire ecosystem of learning. This meant establishing systems that would make practical sense in the women’s daily lives. The first issue to address became the health of their children, especially since E. coli contamination is one of the biggest problems in villages. Three hundred thousand children five-years-old and under die of diarrhoea each year, according to the Govt of India.

Many of the women with whom AMMACHI Labs worked were manual labourers, so a project was initiated to use digital training for toilet construction to provide for their homes and communities. The women received certificates in recognition of their vocational skills and were eligible for three times the money they made in general manual labour. Timing-wise, this worked well with the Central Government’s national agenda to end open defecation across the country.

“The women were very excited. In the first cohort of 18 villages, we worked with about 10 women from each village and taught them masonry, plumbing, and plastering using all the technologies that we had developed to build toilets in their villages,” said Dr Rao.

“Most of those villages were declared open defecation free (ODF) by the Govt of India. It was something that we were very proud of, so we took it even further.”

AMMACHI Labs projects quickly expanded and now include developing teams of women to test water contamination in their villages, a robot to monitor and mentor school children in handwashing, and further development of technology to support skills training instead of robots replacing people in the workforce.

The vital component of this evolution is that we must realise the dependence of the parts upon the complex whole to which they belong. Technology has no meaning without relationships, environment, and context. Its development cannot be abandoned, but it must be ethical.

“Technology is an amplifier. Please remember that,” concluded Dr Rao as she shared from the heart that it can be a means to a better world.

“There are some very core SDGs (Sustainable Development Goals)— like gender equality, reduced inequalities overall, responsible consumption—and I think as the academics, it’s our moral responsibility and duty to spread the knowledge and share the wisdom.”

Photo 1: AMMACHI Labs developed India’s first haptic simulator, a robotic device that can replicate construction tools via computer and user interaction.
Photo 2: ARI for the Common Good Institute helps address the everyday and long-term challenges of AI and robotics.
Photo 3: AMMACHI Labs works with women in villages across India to teach them masonry, plumbing, and plastering as an alternative means of income for their families.
Photo 4: A crucial key to AMMACHI Labs’ work is to first consult with the villagers about their needs and priorities and then ensure their voices remain central in the development of solutions.
Photo 5: AMMACHI Labs also focuses on empowering women, as village women are, by tradition, the caregivers of the rest of the family and this leads to society at large.
Photo 6: AMMACHI Labs works to provide village women with skills training in vocational trades so they may transcend daily wage labour and earn significantly higher income for their families. 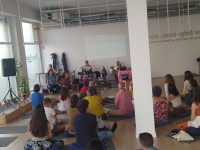 AYUDH Europe: Gathering for the first time after COVID-19

Youth come together to seek positive change in a world that faces the effects of a pandemic, an advancing climate crisis, and an unstable geo-political sphere.

More than 200 people in Europe traveled to the MA Center in Germany to take part in AYUDH Europe’s first physical gathering in three years. This was the 18th Annual European Youth Summit, with the last two resourcefully held online after COVID-19 hit. But to be able to meet in person was a substantial support and relief for members of our youth chapter.

The summit had the privilege to welcome Swami Amritaswarupananda, the Vice-Chair of the Mata Amritanandamayi Math, who arrived from Amritapuri to join the event. His words were of great inspiration to all those assembled, especially as he shared how grateful he was to attend once again.